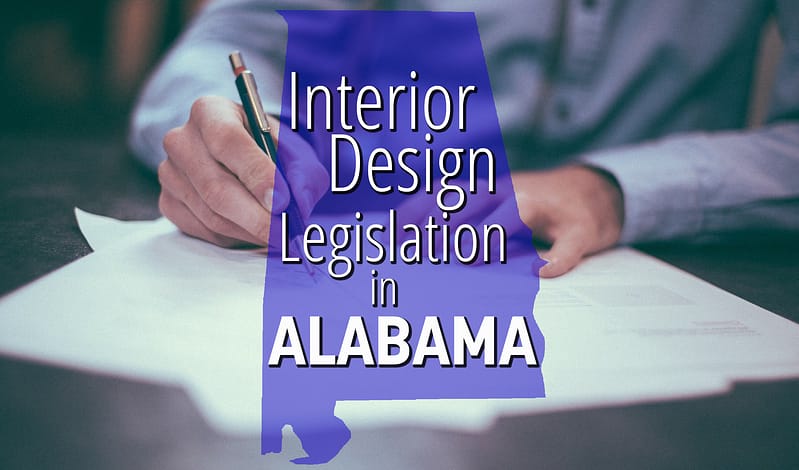 How many times have you heard someone say, “the State of Alabama is last, or near last, in everything;” or, how about the old saying “thank God for Mississippi?” Well, as interior designers, we should all be proud that Alabama sits on top of one important list.  We were the first state to pass interior design legislation in the nation. Mind you, our legislation was not perfect, but first attempts at anything rarely are. However, with some tweaks and adjustments over the years, we now have a law that other states emulate. Let us take a look at how we got to this point.

Alabama’s first interior design statute was passed in 1982, well before the profession became widely recognized as a “learned profession.” “Learned professions” are those having a distinct “body of knowledge” and requiring practitioners to have an specific education, experience in the practice, testing of the “body of knowledge” related to the practice, continuing education related to the “body of knowledge” and ethics standards.  Our first law was a “Title Act,” meaning it restricted the use of the title “Interior Designer,” later tweaked to “Registered Interior Designer,” to only those individuals with the education, experience, and testing  (NCIDQ exam) standards.  However, once ratified, practitioners soon discovered that having the “Title” made no difference in the practice.  That is, “Registered Interior Designers” could still only practice in areas already allowed by anyone without qualifications as described.  However, one positive advantage of the “Title Act” was that it designated to the consuming public that “Registered Interior Designers” had qualifications beyond untrained practitioners.  The restrictions on the practice, however, still existed.

With that in mind, efforts began in 1996 to pass a “Practice Act” called “The Interior Design Consumer Protection Act.” Eventually passed by the Alabama Legislature in 2001,  the “Practice Act” differed from the “Title Act” in that it allows the practice of interior design, as defined in the statute, to registered individuals whereas the “Title Act” only the title to be used by registered individuals. The statute established what was then called “The Alabama Board of Registration for Interior Designers.”  For the purpose of brevity, we will call it “The Board.”  Additionally, the statute provides a method whereby a Registered Interior Designer may stamp/seal interior design construction documents for submission to local building officials for approval, bypassing the unnecessary requirement of having an architect review and stamp the documents.

The statute appeared to be in order and running smoothly until a lawsuit was filed claiming the law restricted an interior decorator’s ability to provide services such as the selection of decorative accessories and paint. The lawsuit was initially heard in the Jefferson County Circuit Court where it was ruled unconstitional in 2005.  The ruling was appealed by the Board. Immediately upon the court’s decision the law reverted to its previous form from 1982. A motion to continue the Board in its then current configuration, to provide minimal disruption and confusion, was approved by the court. The case worked its way up the system to the Alabama Supreme Court.

In the meantime, based upon the recommendation of the State’s Sunset Committee (we’ll talk about that later), a proposed revision to the law was developed to allow broader range of service for non-registered interior designers, and the edited law was passed in 2007, to be active for one year to provide an opportunity to develop a new statute with a more precise scope of the interior design profession, as differentiated from non-registered decorating practitioners.  A ruling by the Supreme Court in 2007 upheld the lower court’s ruling– The Interior Design Consumer Protection Act was unconstitutionally overbroad.

In 2010, the current “Practice Act” was passed into law establishing two major points:  the use of the term “Registered Interior Designer” (RID) and allowing those who choose to register the ability to stamp/seal interior design drawings for permit up to 5,000 square feet in non-assembly occupancies.

Additional Important results of our statute are that it:

As mentioned earlier, the State of Alabama has a government entity called the Sunset Committee. In the simplest definition the committee is a sub-agency of the Legislature that evaluates all state agencies, such as our Board/Statute, and makes recommendations to the legislature on the need for, performance of, and improvements to agencies under review. The committee can make one of three decisions: continue the Board/Statute as it currently stands, recommend adjustments and changes to the statute, or recommend the statute be allowed to “sunset” or expire. If the statute is continued as it currently stands, the Committee can continue it for up to four years, at which time the following process starts all over again. To reach their decision the Committee conducts a Sunset Review where the State Department of Examiners of Public Accounts sends auditors to the Board’s office to examine all records. These records include things like financial operation, abidance of the law, ensuring ethics are adhered to, and the review of the files of random Registered Interior Designers. It is a very intensive review that includes surveys of registered interior designers and a comparison of statistics with similar statutes in other states.

Once the review is complete the auditors prepare a report on their findings and submit it to the Sunset Committee. At this point in the process, a hearing is called where representatives of the Board, and other interested parties, appear before the Committee to present their case for continuing the law and answer any questions the Committee members may have.

Due to the issues caused by the early lawsuit the Board and law was scheduled for Sunset Reviews every year, but since 2010 our Board has been exemplary in its operations and has continued in four year increments.

Key Organizations in the Process:

Throughout the history of our statute, there have been three influential entities supporting the legislation. These entities are ASID, the Alabama Interior Design Coalition (AIDC), and IIDA. Each of these organizations have, in one way or another, contributed to our law’s success. From participating in the writing of proposed legislation to financial support ASID, AIDC, and IIDA have proven to be champions for the profession of interior design. We owe them a great deal of gratitude.

It is most important to understand that any professional licensure’s purpose is for the protection of the “health, safety and welfare of the public.”  Certainly, the side-effects of licensure legislation provide practitioners with a defined profession—defined by its body of knowledge, its education, its practice, its testing, its continuing education, and its code of ethics. 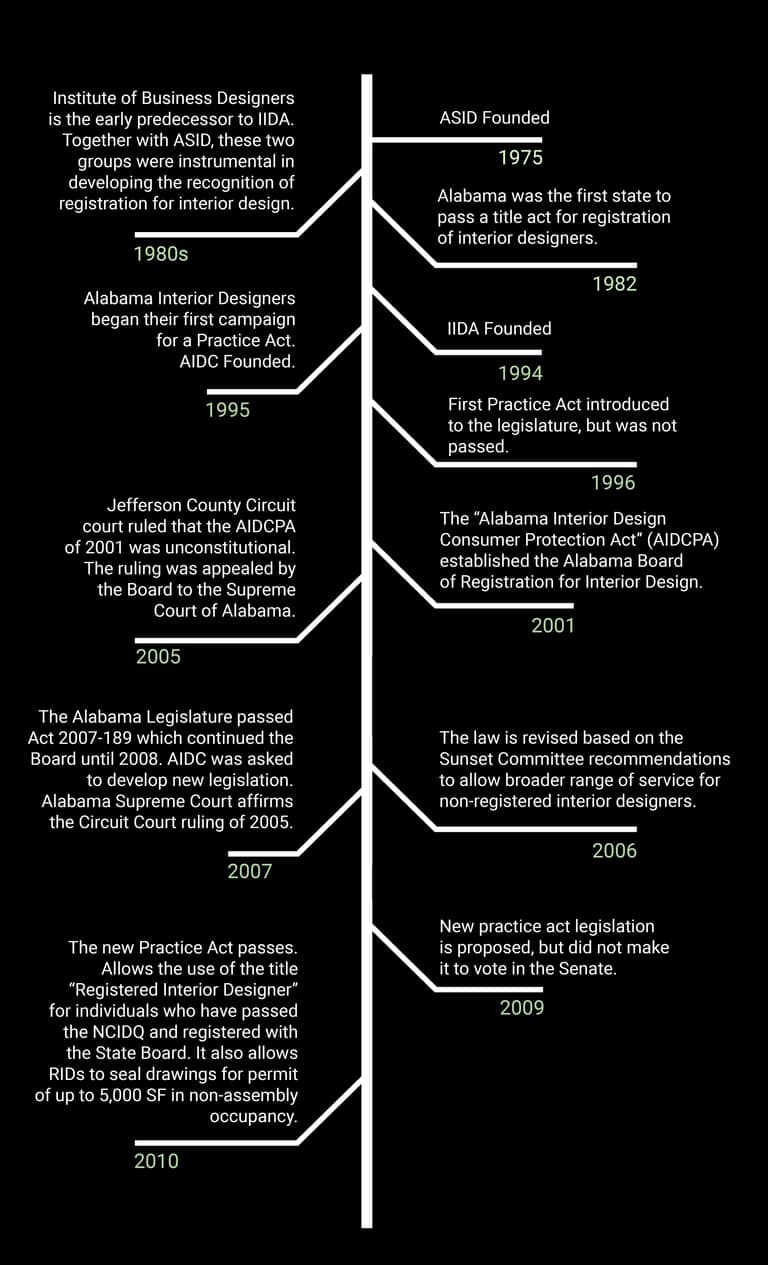