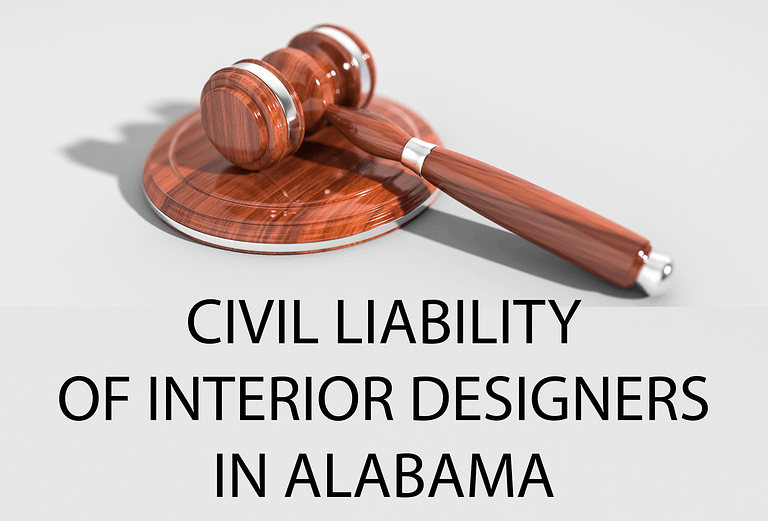 This article will attempt to alert interior designers in Alabama to potential areas of liability arising from their furnishing professional services to their clients.  This article is not intended to be a comprehensive survey of potential claims that could be made against interior designers, but rather is a cautionary tale of some pitfalls to avoid.  The information furnished herein should not be considered legal advice and should not be relied upon without consulting one’s lawyer.  Please see the disclaimer at the end of this article.

(c) Any registered interior designer who stamps or allows to be stamped any document that is not prepared under his or her supervision and control shall be guilty of a Class A misdemeanor.

(c) If the board determines that any person is violating the title restrictions contained in Section 34-15C-9, or that any registered interior designer is violating any other provision of this chapter, the board, in its own name, may seek an injunction in the circuit court for the county of residence of the accused, and the court may enjoin such person from violating this chapter, regardless of whether the proceedings have been or may be instituted before the board or whether criminal proceedings have been or may be instituted.

And from the Alabama Administrative Code, the following on the power of the Board:

The board may refuse to grant, deny, revoke, suspend, or reinstate a certificate of registration to a Registered Interior Designer; issue a private or public reprimand to an individual possessing a certificate of registration; and assess and collect administrative fines not to exceed $2000.00 for violations of Code of Ala. 1975, §34-15C. In addition to the foregoing, the board may institute any legal proceedings necessary to enforce this chapter, or any combination of the foregoing, for any of the following conduct: (a) Fraud, deceit, dishonesty, or misrepresentations, whether knowingly or unknowingly, in the pursuit of his or her practice or in obtaining any certificate of registration or other thing of value. (b) Gross negligence, misconduct, or incompetence in the pursuit of his or her practice. Chapter 485-X-7 Interior Design Supp. 3/31/19 7-2 (c) Conviction of a felony until civil rights are restored. (d) Incompetence, as adjudged by a court having jurisdiction. (e) Violating or directly or indirectly aiding or abetting in the misuse of titles and/or seals by a person without valid registration pursuant to this chapter in the State of Alabama. (f) Practicing in this state in violation of any standards of professional conduct as may be established by rule of the board. (g) Failure to pay any fee or administrative fine assessed by the board. (h) Failure to comply with any final order of the board.

Essentially, the owner will claim that the contractor (or interior designer) was negligent in some respect or breached a written or oral contract or breached written or implied warranties.  The plaintiff must prove that the contractor, or interior designer, failed to meet the standards of his or her particular trade or profession.  He or she does so by hiring an expert witness in the particular trade or profession practiced by the defendant.  The expert will inspect the building and the plans and render a report, specifying various violations of industry standards, building codes or other regulations or standards.  The defendant must then hire his or her own expert to refute the claims of plaintiff’s expert.  It can be an expensive proposition.

Some of the claims made against contractors and tradesmen, and potentially interior designers, include the following:

The above are typical causes of action claimed in “bad house” or “bad building” cases, but it is not an exhaustive list.  What can you do to avoid these kinds of claims or provide a reasonable defense against them?  Here are some suggestions, but they should not be taken as legal advice.  For that, consult your attorney.

Have a written contract with your client.  It should specify, at a minimum, the following:

Keep track of the progress of the work.  You are not supervising it, just monitoring its progress.  Communicate with the owner often.  Many lawsuits result from a lack of communication between the owner and the potential defendants.  Make it clear to the owner that you are available to address any issues he or she may have that are not being addressed by the contractors.  You are on his or her side.

Keep abreast of the building codes.  The code officials in your area probably have periodic meetings that will provide you with CEU’s and the latest in code issues.  Attending those meetings will also establish invaluable relationships with the folks who will be enforcing the codes.

Obtain malpractice insurance, sometimes called “errors and omissions” insurance.  If you own or rent a space for your practice, obtain a “general liability” policy that would cover premises liability issues like slip and fall cases.  The two types of policies cover different risks.  For instance, a “general liability” policy might not cover your work as a professional interior designer.  For protection against an allegation of professional misconduct or malpractice, you need an “errors and omissions” policy.  Check with your insurance agent for the types of policies you need to defend and indemnify you for the possible claims identified in this article.

I hope these recommendations are helpful to you.  I must emphasize, however, that they are not substitutes for seeking legal counsel in drafting your contracts and addressing the issues in this article.  Your lawyer may or may not agree with the suggestions made above.  A little money spent upfront might save you many dollars later.  Please see the disclaimer below.

Stephen V. Hammond is a graduate of the University of Alabama School of Law.  He was a Student Work editor on the Alabama Law Review.  After graduating from Alabama, he took a job in the law department of Exxon Company USA in New Orleans for five years, returning to his hometown of Decatur in 1979 to establish his own law practice.  He has been in the private practice of law in Decatur since that time.  He is an AV rated lawyer by Martindale Hubbell, the premier peer rating service for lawyers.  The bulk of his practice is in civil litigation defending clients sued for money damages.  He has represented many contractors, sub-contractors and tradesmen in such lawsuits.  No representation is made that the quality of the legal services to be performed is greater than the quality of legal services performed by other lawyers, and no representation is made that Mr. Hammond is a specialist in the matters discussed in this article.